The oldest known trace of the family in Trets: an assembly of village notables includes a Sumeire in its ranks.

Honoré Sumeire signs a transaction with the Barons of Trets.

Laurens Sumeire, mayor of Trets, was deputy for the States of Provence.

Jean-Baptiste Sumeire was a wine merchant and owner-producer, as was his father Jean-Baptiste, and his grandfather André, who had a business in Trets. 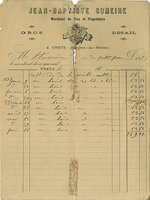 He lived in the Rue Gérenton in the village of Trets, and his cellar was located in the little square behind the town hall. He had four boys, Félicien, Clément, Arsène, Gabriel. He bought a wine business for each child. The yougest son, Gabriel, who was born in 1880, was given the business in Trets.

Jean-Baptiste Gautier, a grain merchant, winegrower and farmer, purchased a very old wine property that belonged to Jean-Baptiste Coussin in the seventeenth century, a lawyer at the Court of Appeal in Aix en Provence. His granddaughter Nelly, by marrying Elie Sumeire in 1936, will bring Coussin to the Sumeire's family.

Jean-Baptiste Gautier, who purchased Coussin in 1903 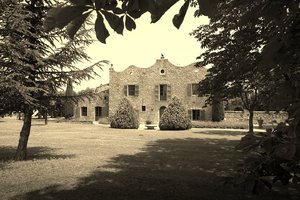 Gabriel realized that he needed to be closer to Marseille in order to develop his business. After leaving Trets, he was in the habit of stopping at his sister's house, with his wagons loaded with six demi-muids (a cask holding slightly more than 600 litres), in the suburbs of Marseille in the Croix Rouge district, on the edge of Allauch.

It was then that he met Claire Delestrade, who was also of country stock; they married in 1908. They settled in Croix Rouge, from where trucks bearing the family name would depart for several years to travel around France and supply their customers. 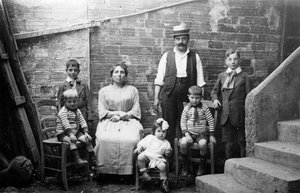 Gabriel, Claire and their five children in Croix Rouge - Elie is on the right

Elie, in the dark jacket, with his brothers Fernand, Raymond, Roger and his sister Paulette

When the war broke out, Gabriel was called up leaving Claire to manage the business.

Gabriel and his children developed the family business. 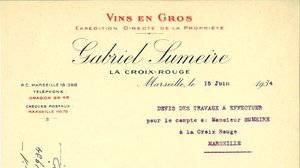 Elie Sumeire made the acquaintance of Mr. Baldaccini, a wine merchant in the Belle de Mai district of Marseille, and his young son César. Many years later, César becomes a great sculptor, famous for his "compressions". 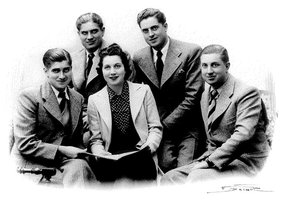 The Sumeire brothers and sister photographed by the Detaille agency. On the right is the eldest, Elie, the future grandfather of Olivier and Sophie

Birth of Gabriel, the eldest son of Elie and Nelly Estève, Jean-Baptiste Gautier's granddaughter, whose dowry included Château Coussin. Gabriel's godfather was his grandfather, and was thereafter called godfather ("parrain") by all of the family. 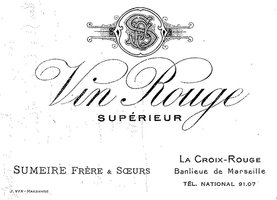 The Second World War breaks out.

With the encouragement of Elie, the four Sumeire brothers founded "Etablissements Gabriel Sumeire", a limited company, of which Elie was President until 1973. 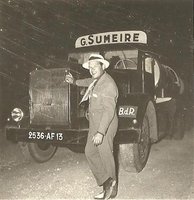 One of the Sumeire trucks, this photo was taken during the shooting of the film "Cigarettes, whisky et petites pépées" 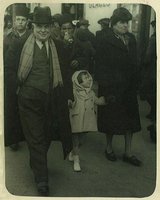 Gabriel with his grandson and godson Gabriel, and his wife Claire. 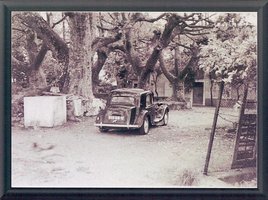 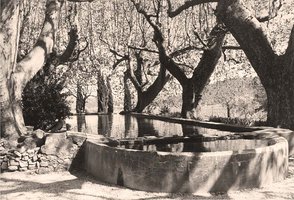 The pond at Château l'Afrique

Olivier, son of Gabriel and Marcelle Marty is born.

Sophie, Olivier's sister is born. Death of Gabriel, the "Parrain".

The Sumeire properties are divided among the children thus ending the family wine merchant business. 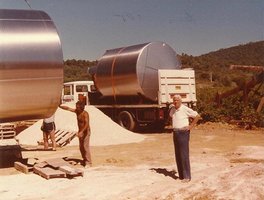 Elie during the construction of the winery at l'Afrique

Elie and his two sons Gabriel and Jean-Pierre take over the running of the family properties: planting new vines and using traditional growing methods without the use of chemical weed control, building two wineries and carrying out restoration work.

Construction of the wineries 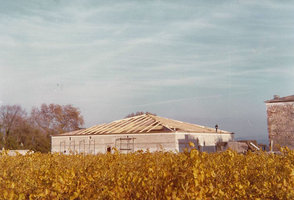 Construction of the winery at l'Afrique

First vintage of Château Coussin bottled by the Sumeire family. 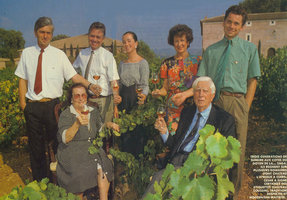 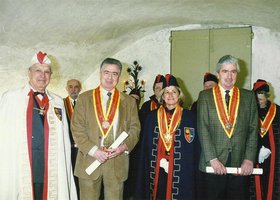 Gabriel and Jean-Pierre with their cousin Régine in Afrique's vaulted cellar, during a meeting of the brotherhood of Medusa (La Confrérie de Méduse).

One August, in Roquefort les Pins, after an idea of Gabriel, the sculptor César designed a special presentation wine box from labels of the Sumeire family's chateaus, as a mark of his friendship with Elie. 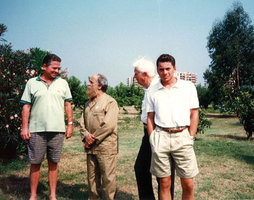 Gabriel, Elie and Olivier Sumeire with the sculptor César 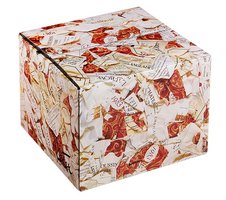 Close-up of the César box and the artist's signature 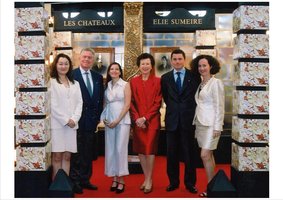 Gabriel and Jean-Pierre, convinced of the potential of the Sainte Victoire terroir, buy Château Maupague, in Puyloubier, at the foot of the mountain. 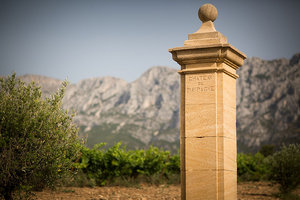 Maupague, pillar at the entrance 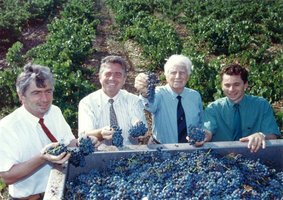 Three generations in the vines

His sister Sophie joins him. 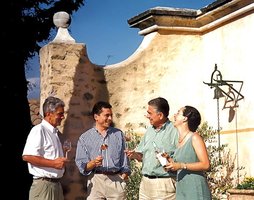 The first vintage vinified by Olivier. 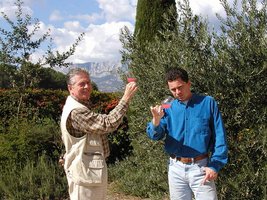 Olivier watches over the vines

Gabriel receives the rank of Chevalier of the Legion of Honour. 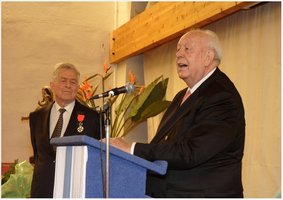 In January, Jean-Claude Gaudin, mayor of Marseille presents Gabriel Sumeire with the Chevalier of the Legion of Honour insignia 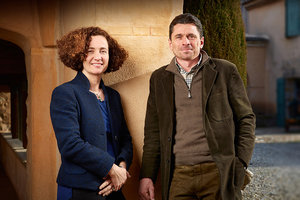 Sophie and her brother Olivier

With the dawn of the twenty-first century, the family crest was redesigned to reflect the family's history and values: 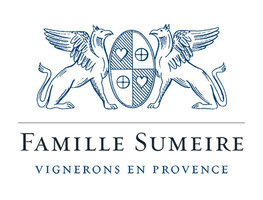 Crest of the Sumeire family, Winegrowers in Provence

The presence of a heart in the family crest evokes our farming, winegrowing origins. When a vineyard is ploughed with shovel attachments, the one in the middle (which leaves a furrow in the row behind it) has the shape of a heart, from which it takes its name.

Numismatics enthusiasts will recognize the circle with a cross inside it as representing the old currency of Marseille, the obole, and thus an allusion to the Phocaeans and the vines that they imported in the fifth century BC. The cross also recalls the role played by the monasteries in the development of the vineyards, particularly the monks of the Abbey of Saint Victor in Marseille.

And finally, the symbol can be interpreted as a wheel, referring to transport and thus to the wine merchant business which was a Sumeire family tradition for more than two centuries. The griffins on either side of the crest were used in times past as a symbol of the family business that could be recognized by faraway, sometimes illiterate populations.

Our motto, "Aratro et rota" ("By plough and wheel"), affirms that the plough and wheel are still in contact with the earth, and that in telling our family history, we must remain humble.